Last night we had a four player game at Julian's, using For King and Parliament, the TtS ECW ruleset. The game went down to the wire but that was little to do with me - my first half in particular was abysmal, the Card Gods are obviously just as fickle as their colleagues with responsibility for the Dice! After the previous game, the Battle of Montgomery, when I could hardly draw a poor card, last night was the complete opposite - at one point trying to activate a unit with the commander attached and needing only a 2 or better, I failed TWICE, drawing a 1, redraw because the officer is attached - I drew a second 1...FFS!

Andrew was opposite me on the Royalist side and had never played these rules before; however, that didn't seem to inhibit him much. I initially knocked out one of his infantry units with the help of a redraw using an attached "Gallant Gentleman" figure but when I charged my three cavalry against his two, it was a complete disaster! And from then on I was on the back foot for the rest of the game. Fortunately for our cause, Chris did much better against Julian on our left flank and his cavalry was particularly effective so that although at one stage we had about six army points left to twelve or fourteen for the Royalists, we managed to whittle them down in the last quarter of the game (I did manage to make a contribution when my twice shaken pike block in a hedgehog formation managed to destroy a unit of elite Cuirassiers against all the odds!)

Following are the pics - some not that great but I have left even the crappy ones there as they tell part of the narrative of the game. Napoleonic at Barry's tomorrow so its a good hobby weekend for a change - just need to buy some figures to paint now! 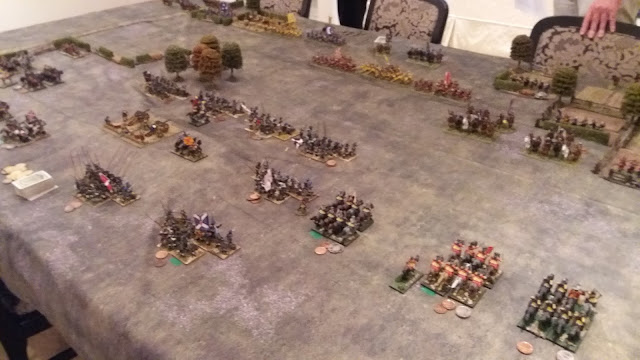 The initial set up with Parliament (my Covenanters in the main) on the near side, my command to the right. Opposite are the Royalist (Julian's Swedes) 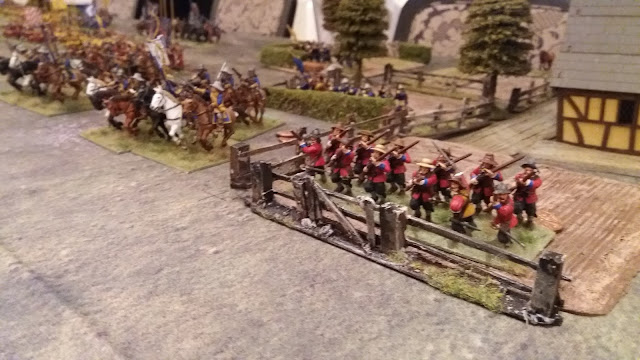 The extreme left flank of the Royalist line, dismounted dragoons defending a small village opposite my cavalry. 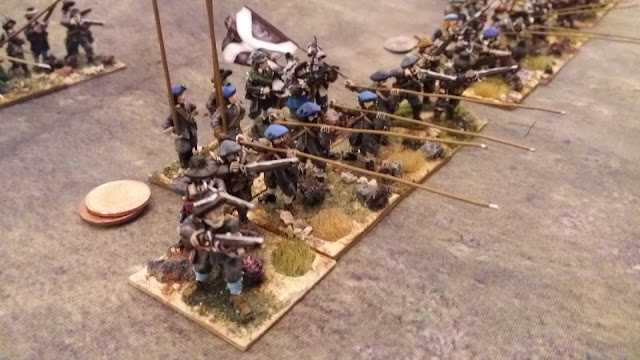 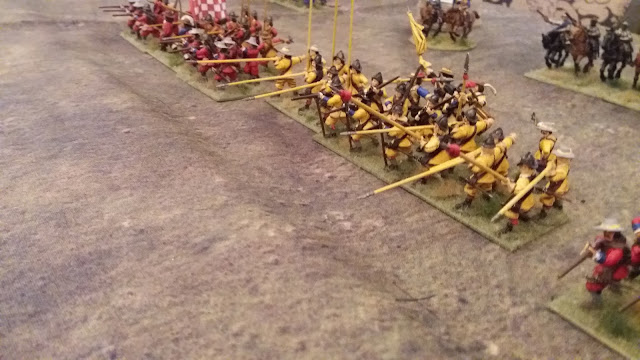 The guys in the hiviz (nice H&S compliance, we want a safe battlefield!) were a "pike heavy" unit that I nonetheless broke and dispersed with the aid of the Gallant Gentleman 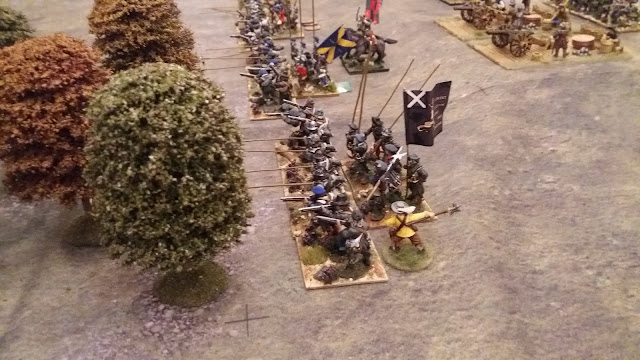 Part of Chris's command in the centre of our line 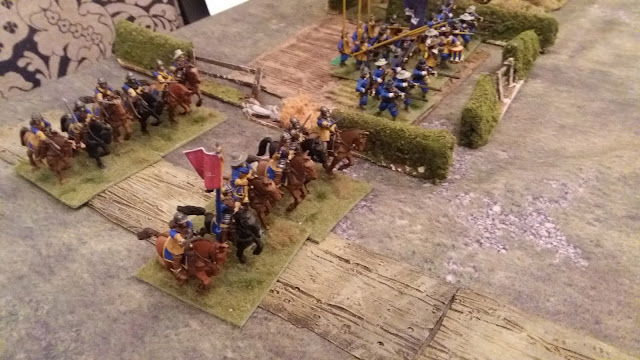 The extreme left of the Royalist line, commanded by Julian. Most of his troops are plastic Warlord 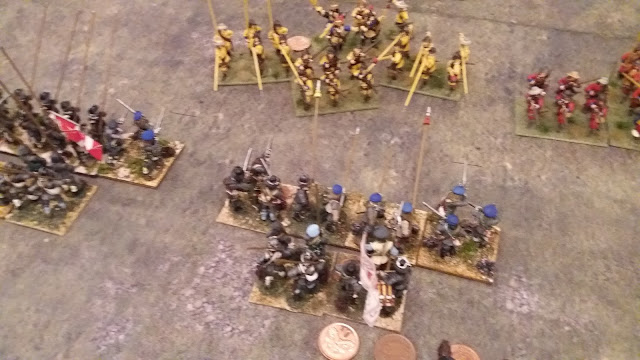 The Hiviz unit about to depart the field, removing three army point coins with them! 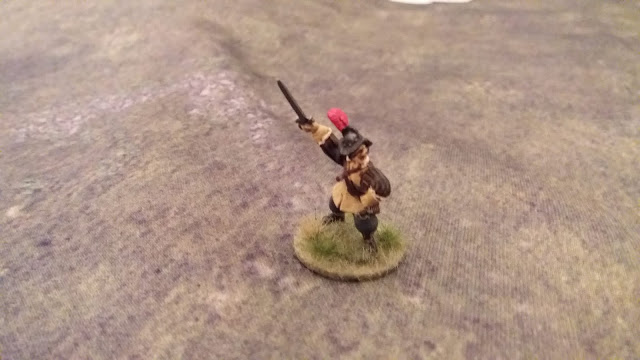 The Gallant Gentleman who provided the extra oomph to break the Yellowcoats - a one use weapon, having made this contribution, he departed the battlefield 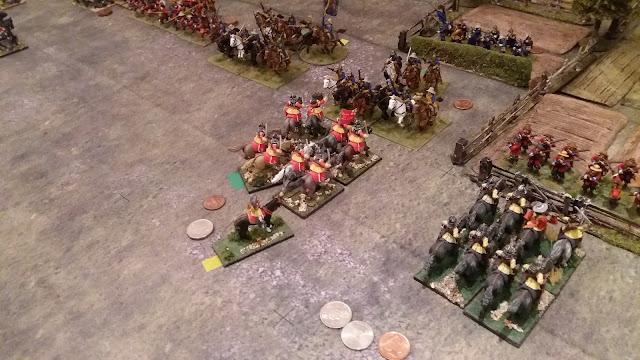 My cavalry attack goes in - the unit in red coats was the first ECW unit I ever painted - Front Rank figures that are no longer available and painted over twenty five years ago! The nearer unit are also Front Rank. 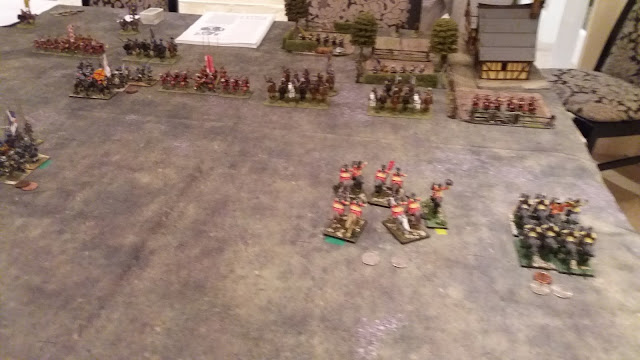 This is one of the poor images I retained because it shows the outcome of my disastrous charge, one cavalry unit gone the another badly shaken (disordered bases)! 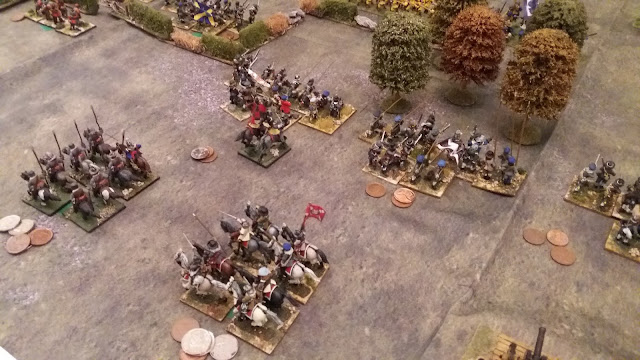 Meanwhile, Chris decided to redeploy all his infantry further to the left so spent two or three moves moving them into position - his cavalry also deployed to the extreme left of the field 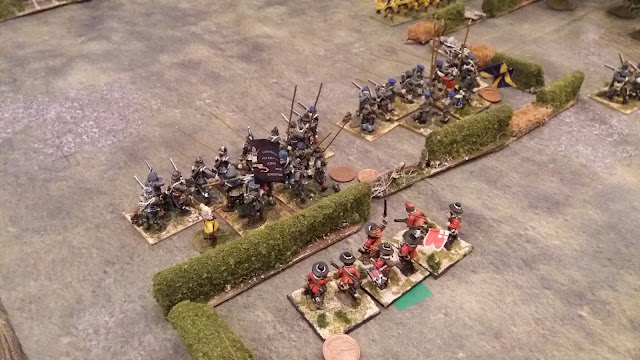 Chris's infantry advancing on our left, passing through the dragoons posted behind a hedge line 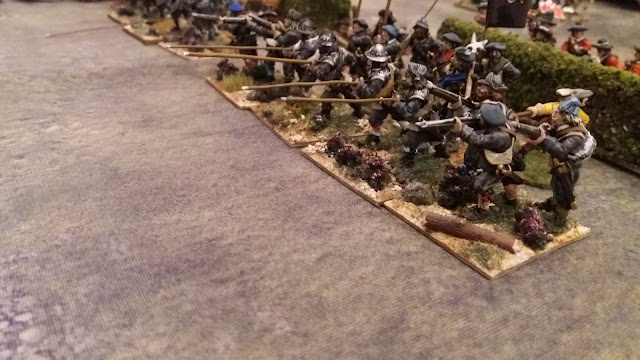 Close up of one of Chris's infantry units - again, my Covenanters comprising Renegade and Bicorne figures 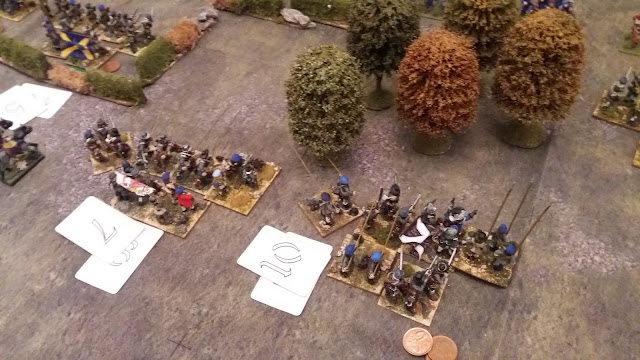 Chris had some of his troops masked by an inconvenient wood in the centre of our line! 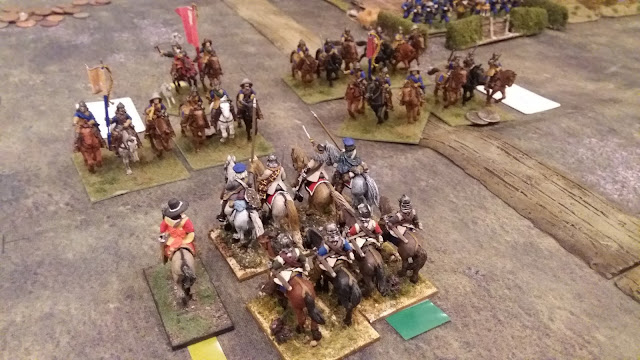 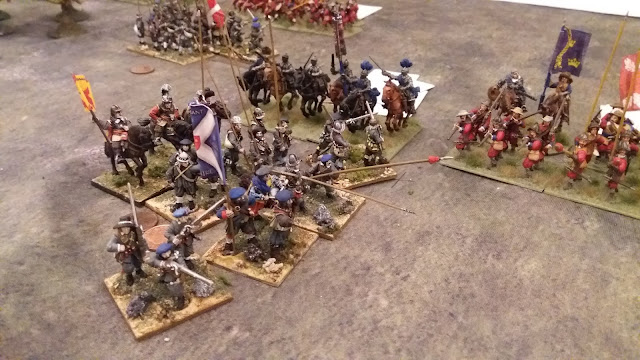 Andrews Cuirassiers catch one of my pike blocks in a flank attack - the attacker doubles his cards - I think in this instance Andrew got 6 chances to hit me - and the defender cannot fight back at all - OUCH! But incredibly they survived - see below...…. 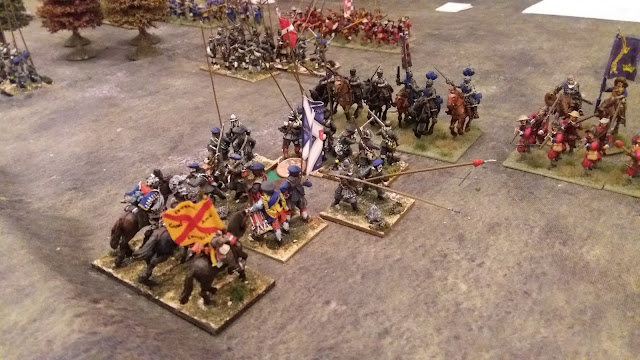 My twice shaken (it takes three to make them flee) pike unit in Hedgehog formation. They could only fire once, could not double shot their muskets and only scored a hit on a 9 or 10 - but in the end, they stood their ground and destroyed the Cuirassier unit adjacent to them! 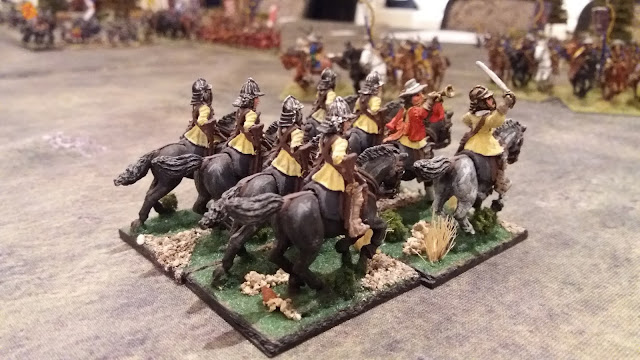 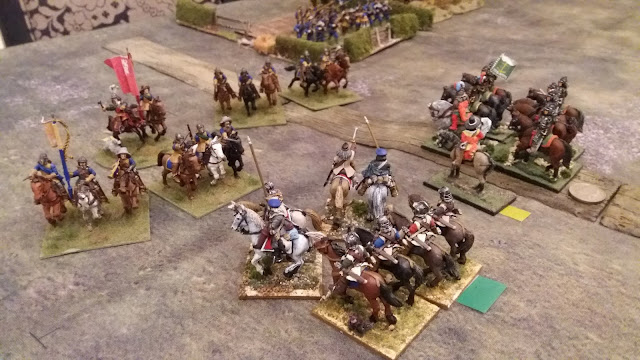 The cavalry melee at Chris's end of the table continues.... the messy looking formations are intentional, one stand out of alignment indicates one "shaken" hit, two stands out of alignment two shaken - three and its goodnight nurse and minus three army coins! ( Although in Julian's case, as he has small units of only two bases, one more unsaved hit and they are toast....and that's what happened folks!) 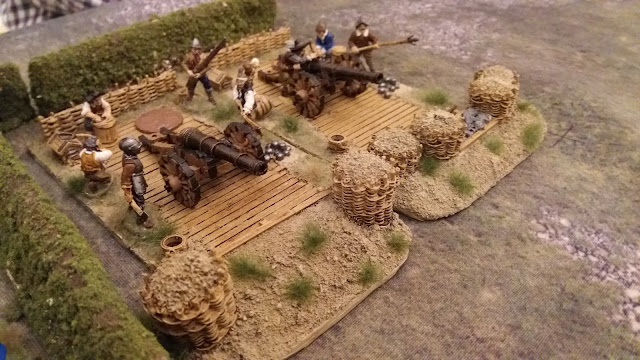 Julian's guns did a reasonable amount of damage to Chris including the first casualties of the game when they destroyed a unit of dismounted dragoons at long range with their first salvo! 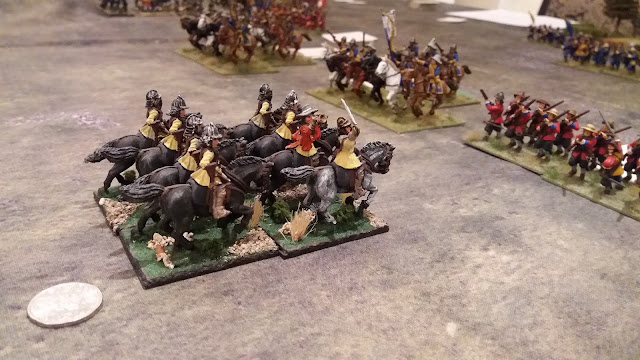 My lone cavalry charged Andrews dragoons and overwhelmed then! 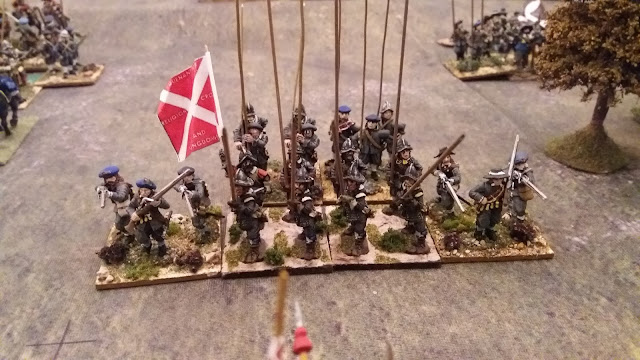 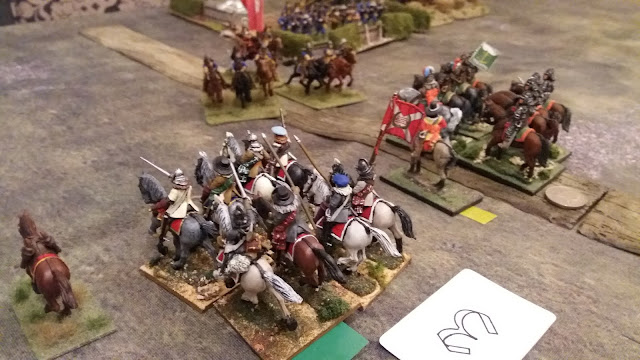 Chris continues to smash the Royalist cavalry to bits - the rider less horse indicates an uncontrolled pursuit, a critical element in this era that we totally forgot about on the previous occasion! 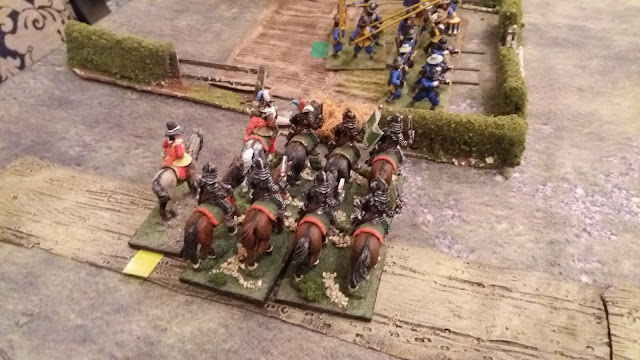 Last image of the game - pretty obviously, these Cuirassiers (Front Rank painted as Haselrigg's Lobsters in the 1990's) smashed the Royalist foot to their front and then when my Hedgehog Boys knocked out Andrews Cuirassiers, that was the game. We still had 5 or 6 coins in our army morale pile but the Royalists were empty.

A pretty close game and I have to admit I wasn't enjoying it much for the first ninety minutes or so (bad loser!) but we managed to snatch victory from the jaws of defeat in the final third of the game.

The only thing about these rules I don't like is the aesthetics - too many marker chits of one kind or another are required - but I am not sure what else you could substitute to keep track of ammunition, shaken units, dash for cavalry, ammunition for cavalry and infantry etc...we use untidy base alignment to represent shaken but you need something physical to keep track of how many times you have fired double shots etc.....

I should have a Napoleonic report up in a couple of days so please call back again soon!