I may have rushed this figure a bit - she was painted from start to finish in a couple of hours this evening. She looked pretty good to the naked eye, but under he harsh gaze of my camera, the paintwork looks a bit like an impressionist work - all blobs of colour! I contemplated redoing the skirt/dress in particular, but in the end I have left her as is - she probably wont get anything more than a supporting role in an occasional game, so she will do the way she is......

December here in a couple of hours, the official start of our summer!
Posted by rross at 22:36 25 comments:

Evening all....I have been very slack of late and not much of anything has been achieved. The one figure I have managed to get done is this Reaper Bones plastic courtesan. I came across her on our local auction website along with a dancing girl for the princely sum of $6. The seller had quite a number of "Bones" figures for sale, so I bought another pair as well, and including postage it might have been $20, which I was fine with paying

When the figures arrived, I was struck by how tall they are, but I think I can still make them work. There is nothing in the Reaper description to indicate the figure should be a Geisha or even Oriental, and there are very nicely painted examples online where she is a blonde European - but I instantly thought her hair style suggested the Far East and so here she is, ready to join my Pulp adventures in some capacity or other! 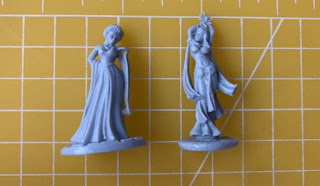 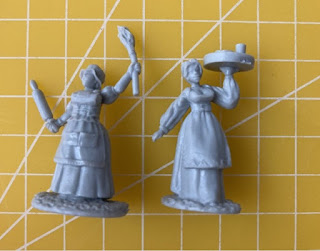 And finally, as a special service to my wargaming pen pal Stew in the US, here is a definition of what a Geisha is!

Geisha (芸者) (/ˈɡeɪʃə/; Japanese: [ɡeːɕa]),also known as geiko (芸子) (in Kyoto and Kanazawa) or geigi (芸妓) are a class of female Japanese performing artists and entertainers trained in traditional Japanese performing arts styles, such as dance, music and singing, as well as being proficient conversationalists and hosts. Their distinct appearance is characterised by long, trailing kimono, traditional hairstyles and oshiroi make-up. Geisha entertain at parties known as ozashiki, often for the entertainment of wealthy clientele, as well as performing on stage and at festivals.

Modern geisha are not prostitutes.

(I thought it important to emphasise the last point!)

Last of The Border Reivers

Apart from a few civilians, these are the last of the Border Reiver figures I have in the lead pile. These seven ruffians are by TAG and very nice figures they are too. For some reason, I missed one of them out of the group shots and I cant be bothered redoing them - he has his own individual shot so that will have to suffice!

I still have a number of orders en route from the UK and US - who knows when any of them will arrive, given Covid ANF Christmas - could be I dont see some of them till 2022...
Posted by rross at 19:12 36 comments:

As a break from all those 1812 Americans, I pulled out my dwindling supply of 3D printed Soviet female soldiers and painted up another three of them. I bought a group deal from the manufacturer and basically got one of each figures - he kindly included two or three double ups, where I assume the first print was not 100% - so you can see, they are quite an eclectic mix of poses! Today I have a marching figure (there is another almost exactly the same but minus the rifle; a riflewoman in a slightly odd pose, caught spinning around to face a surprise threat perhaps?....; and a female Cossack armed with an  LMG (again, there is a very similar pose, but of a tank crew woman!)

I photographed these outside early in the morning (about 0730) using the x 2 method and they look pretty good to me - I had to delete the originals and redo them as there were small dots of basing material on two of the three figures, invisible to the naked eye (well my naked eyes, anyway!) but glaringly obvious in the photos!

Next on the painting desk are the last seven TAG Border Reivers, which are lovely figures and should paint up very nicely.

Finally, we had some "once in 800 years" lunar event a couple of days ago, where the shadow of the earth fell across the moon and caused an almost total (but not quite) eclipse. Here is an image from about 10pm, when it was supposedly at its best and the moon would look orange/pink. I realised afterwards, I should have used the video camera on photo mode and zoomed, rather than the camera on my phone, which distorted anything closer that the image below

The remainder of the winter uniformed US regulars join their comrades on parade tonight. I do like the all blue uniform, I must say.

I have now finished all the "complete" units of War of 1812, although I have enough left over for a couple more battalions and I am on the scrounge locally for potential officers. If none are available, I will look at a small purchase from one of the other manufacturers, although it wont be Brigade Games as unfortunately nothing has happened about my lost package yet, DESPITE the fact I paid compulsory insurance - I might have to look into whether my bank can forcibly reverse the payment.

First up below is one image each of the three new bases, then a series of images from various angles, including rear view to see the variation on the "US" labelling on the back pack, plus an aerial view to give an impression of the basing - enjoy!

Next on the painting desk, by way of  a change, are three more of my 3D printed WW2 Russian female soldiers.
Posted by rross at 20:06 35 comments:

A Slight Variation on the 1812 Theme

Here are the first half of my latest War of 1812 unit, wearing the official "winter" uniform of blue trousers. There are quite a lot of images here as I was experimenting with the zoom on my phone again - the majority are on x 2 zoom and then there are a few at the end on x 1 where I just got physically up close to the figures - will be interesting to see which look best and what readers think....

The other nine figures should not be too far off being finished.

The three images below are all on x 1

To me, its hard to say which technique is better - I actually think all the images look pretty good to be honest, but do any readers have a strong preference either way?