Here is the latest addition to the US War of 1812 force. Whilst getting ready to prep the next unit, I realised that, although I have sufficient enlisted men for three or four more units, I may be about to run out of officers and drummers - I may even have to consider a small investment to make use of most of the remaining infantry - we will have to see how that goes.

The full regiment from different angles.......

One Off Special
Regular readers may recall I mentioned a Pulp Plan to get some Asian Female heads, so I could convert figures for the various Chinese and Japanese Pulp factions... and with the kind assistance of Mr Freitag in the US, these were duly obtained and sent to me in a small envelope that took about three weeks to arrive. The problem now is, my intention had been to use some of the 40 Brigade Games RCW bulk pack figures for conversion purposes; however, these have still not arrived, despite being last heard of at USPS in NYC on 8 August ....sigh. So, in desperation, I have resorted to converting one of the Perry plastic Afrika Korps figures, using my least favourite of the heads, on the basis that if it was a cock up, I would not have wasted a good head! 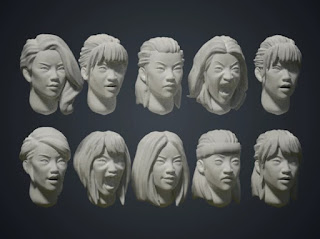 The head used is row two, second from the left

I added a sword from a Perry plastic British Napoleonic officer, trimming a few bits off to make it look a bit more like a Samurai katana

I did not get the neck quite right but I think the conversion worked ok as a proof of concept.
Posted by rross at 18:51