A GAME, A Veritable Game!

After almost three months - 107 days apparently, but whose been counting?! - and with over 90% of the population of the Auckland Region double vaccinated, we have had a change in our Covid 19 alert status, whereby now life is more or less back to normal - pubs and restaurants can open, people who can work from home are no longer obliged to, and sensible people like Julian and me can get back to face to face gaming!

This being the case, Julian asked me earlier in the week if I would like to drop by after work on Friday evening - after considering for a nano second, I accepted his kind invitation.  Always a gentleman, Julian even allowed me to suggest we give the Border Reivers their first run - he has created a small family band too. (Unlike me, Julian stuck to the original plan ie buy 10-20 figures to create a Reivers warband - then STOP!)....We all know what happened to THAT plan in my case - I now have 50 -70 figures and I still dont have the mounted versions of the ORIGINAL Hokahey Reivers - but hey, I do have TWO versions of Mary Queen of Scots PLUS about twenty female civilians - our Border villages seem to be strangely denuded of male occupants - maybe they are out reiving?!

We managed to get in two games, taking a turn each at being attacker and defender - we moved and replaced terrain between games one and two, and I swapped my figures around. We had three Heidmen each, with one group of six mounted figures and two groups of Fitloons - foot lads - one six strong and the other seven. The games lasted about 90 minutes each and were a lot of fun. Here are far too many pictures! 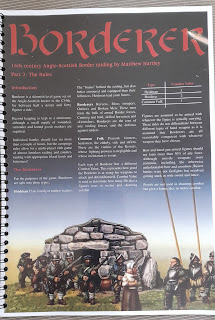 The rules used come from an old copy of Wargames Illustrated - very simple and all the better for it in my opinion! There is no morale and only three possible out comes of combat - death, wounded or captured! It made for quick and bloody melees.

Before we got started, Julian and I spent a pleasant 45 minutes catching up on the last three months and knocking the edge off our thirst - Stew, these are Sour Cream and Chive flavoured chips (later, we added a second packet of Ready Salted to the bowl! I know you like these details.....) 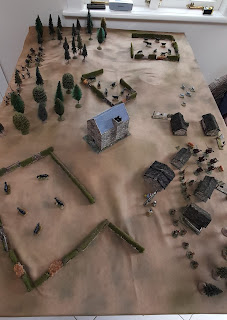 All those cardboard cottages I made 18 months ago finally get to be used!

Caliver armed defenders - most of Julian's force was created from odds and sods left over from his Thirty Years War project - I think they look the part! The villagers seem unconcerned as they continue to hang out the washing - stoic people in Cumbria and Northumberland!

Fitloons in the woods (moving at half speed)

General view from my side of the table

The defending calivermen pass through the village

Julian committed his cavalry to the attack. At the start of each turn, a number of D6 are rolled for action points - you require one action point per figure and they can only perform one action per turn - usually, you have less action points than figures but in theory we could have rolled 24 (we had 4 D6 in this game - one per Heidman plus one other). Cavalry move 120mm + 2 D6 - so a charge is risky - Julian only made contact with one man I think

On the next turn, I was able to close the gap on Julian and pick my targets, ganging up two to one on three of his figures - with predictable results!

Here Julian has two wounded and two healthy figures facing five healthy figures. Wounded cant fight and no figure can disengage from melee EXCEPT a cavalryman whos opponent(s) are all on foot - I told you the combat was brutal!

Healthy figures "fighting" a wounded figure dont have to win a combat, they just roll for the result - 1-3 captured, 4,5 wounded, 6 dead. A second wound = death, so once you are wounded, you are pretty much done! Above I have 6 healthy troopers facing Julian's one remaining cavalry man (the single figure to the rear was captured)

And one of my Fitloons starts herding away a group of kye (coo's/cows). They move at 2 D6 per turn

Two of my mounted guys head for a second herd

Meanwhile, on my right flank, the Calvermen had been engaging in some aimed shots, scaring off my Heidman and wounding one of his band (yellow denotes fired - they have to take a break next turn to reload but can still move; red is a wound - they didnt have the fight all their own way!)

The herdsman continues to drive the beasts towards the border

The mounted reivers also drive off a second herd of cattle

With my mounted reivers to their flank, the pikemen pulled back, and we called the game in time to partake in a lovely home cooked meal provided by the Fair Jane (Mrs Julian)
GAME TWO

I swapped the layout around a bit and substituted the smaller of the two Pele Towers I made for the Bastle House, also placing it on a different hill

This gave me an excuse to add some of my ladies to the battlements!

This time, the forces of the Scottish Crown were the defenders - local village militia above

The Deputy Warden of the Scottish West March and six calivermen

The peaceful villagers go about their daily tasks

While the Wardens wife gazes lovingly at her husband from the Pele Tower!

Here come the Bells! (Julian actually has a genuine Border Reiver surname, the Bells were a notorious bunch of thieving blackguards - and now he is a dentist....!)

The guy in red is "affrighted" ie running away as a result of long range caliver fire. Results from fire are 1-3 affrighted 4,5 wounded 6 dead.

The mounted Bells on the sheep pasture above the village

The cavalry wend their way between fields and buildings...

A lone Bell heads off with my sheep ... he will live to regret that!

In the first cavalry clash, my bannerman outfought Auld Wat Bell and the English Heidman became a prisoner!

The ladies in the tower can hardly bare to watch!

The Warden and his crew line the hedges

In the cavalry melee, I had three of my six guys captured, but also had some good luck eg a single sword armed reiver rolling 2 D6 beat a pair of pistol armed Bells rolling 6 D6

One of the village militia takes a shot at a Bell

Julian did manage to get one herd of cows moving but a nearby musket shot resulted in a FLEE result and they headed off towards the Scottish side of the table!

By this time it was about ten thirty and Julian announced he felt this was a second win for the Scots. Both cavalry Heidmen had become prisoners of the other side but I had won the cavalry melee and it seemed improbable the Bells could get their sticky fingers on any of my animals.
Great games (Chris always says I say its a great game when I win!) a lot of fun, very quick and simple rules that kept us entertained for over three hours - what more could you ask for?!
Posted by rross at 08:59